The course at a glance

Medievalism is a field of study that examines responses to and recreations of the Middle Ages. This year’s course will focus on the extensive writings of  J.R.R. Tolkien, a medievalist and fiction writer who adapted medieval sources to create his own body of myths. Tolkien’s Middle-earth legendarium can be seen as the expression of a twentieth-century writer who is responding to some of the crucial events of his time, such as the two world wars, but who is doing so through the lens of medieval languages and literatures. In our full-year study of Tolkien’s major works, we will examine how Tolkien worked as a myth-maker and how subsequent writers and other artists have extended his mythology.

In the first term, the focus will be on understanding the medieval literature in which Tolkien was immersed and on examining how he remade such sources in some of his stories and poems. We will study theories about folklore and mythology that Tolkien redefined in his fiction and in his medieval scholarship.

By the second term, while continuing our examination of Tolkien’s major fiction and some medieval texts, we will also consider contemporary forms of myth-making in the numerous adaptations of Tolkien’s stories in professional and fan genres — in fan fiction, art, video, drama, and film. Theoretical readings on adaptation, myth, medievalism, oral tradition, and fandom will be included throughout the course.

Because this is a full-year course, we have lots of time to explore numerous issues and approaches, and there are enough assignment options for you to follow your particular interests. Read Evaluation and Student Projects below to get a better idea of just a few of the possibilities.

The title of this course, Studies in Medievalism, indicates the overarching theme and approach to the material. Medievalism is an expanding field of study  that goes beyond simply pointing out how medieval elements are reused and recreated in later periods. In fact, medievalism questions the boundaries that we construct between historical periods and between the borders of distinct disciplines. It asks us to be aware of our attempts to understand the past from a pastist or presentist view. Medievalism also leads us to inquire into the professionalization of literary studies and the role of the amateur or fan in creating historical understanding. It leads us to examine concepts of authenticity and anachronism, as well as to recognize the function and representation of the medieval as other, as the “all-purpose alternative” to modernity, as critic Lee Patterson put it. Theories of translation, performance, and adaptation play an important part in understanding medievalism. 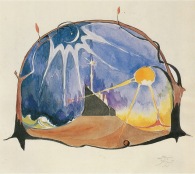 The Shores of Faery, painting by Tolkien

The sub-title of the course, Tolkien and Myth-making, indicates our more specific path to exploring medievalism in the modern and contemporary world. You will have an opportunity to study closely not only Tolkien’s best known works, The Hobbit and The Lord of the Rings, but also other texts such as The Silmarillion, The Children of Húrin, and The Fall of Arthur.  You will develop a fairly extensive knowledge of Tolkien’s fiction, as well as his critical writing in “On Fairy-Stories” and “Beowulf: The Monsters and the Critics.” Tolkien’s theories about and practice in writing fantasy, myth, or folktales will be set against prominent myth theorists who preceded him, such as Max Müller and Andrew Lang, and other theorists of the modern period as well.

–Odin riding his horse, depicted on a medieval runestone

In order to understand Tolkien’s work, we will also read some medieval literature. Tolkien was a medieval scholar whose academic career was devoted to the study of the language and literature of premodern texts, which permeated his imagination. Through the year, you’ll gain knowledge of some of the major works of medieval literature. We’ll read (in modern English translations) some Old English, Old Icelandic, Finnish, and Middle English texts. 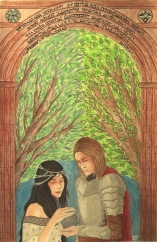 Our study of Tolkien’s work does not only involve his medieval influences. He was, after all, a twentieth-century writer, and this course also examines Tolkien as a modern writer. He is often seen as a writer responding to the trauma of his experiences in the First World War and living through and seeing his sons fighting in the Second. Other themes in his work, such as industrialization, environmentalism, heroism, or freedom and surveillance address modern and contemporary themes, while his handling of gender and race afford opportunities for further study.

Our study of medievalism and myth-making will not stop with Tolkien’s work. Tolkien’s creation of a body of myths and legends has opened the way for others to engage with his Middle-earth mythology. To follow this myth-making impulse, we’ll engage with some concepts from fandom studies and particularly with adaptations in various genres, from the Peter Jackson films to video games to fan works such as fiction, art, cosplay, and vidding. One of the special features of this course is that you will have the option to create  your own adaptations of Tolkien’s work, as you can see in some of the illustrations on this page. You can read more about one student’s adaptation project, “An Imagined Dystopian LotR Film” here.

The fine print: pre-requisites and ENGL or CULS requirements

Pre-requisites
Although the minimum requirement for an upper-level seminar course such as this one is successful completion of one unit of literature at the 1000 level, it is strongly recommended that you have some experience in a 2000-level English course before registering in a senior seminar. No previous reading experience in medieval literature or in Tolkien is required for this course. Please contact me if you have any doubts about your eligibility.

Questions? Get in touch

You can email me at anna.smol@msvu.ca if you have any questions about the course. During the rest of this term, you can drop in during my office hours on Tuesdays or Thursdays 1:30 – 2:00, but please note that my hours are more irregular during the exam period and the summer terms, when I am frequently working elsewhere on my research. Please email me to arrange an appointment if you’d like to meet to discuss the course at these times. 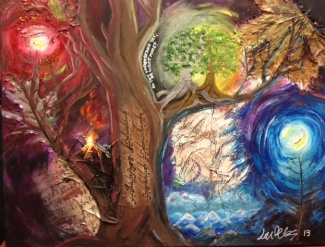 Tolkien:
The Silmarillion
The Children of Hurin
The Hobbit
Tree and Leaf: “On Fairy-Stories” and “Mythopoeia”
“The Homecoming of Beorhtnoth Beorhthelm’s Son”

from Old Icelandic:
Selections from the Poetic Edda
“The Deluding of Gylfi” from the Prose Edda
The Saga of the Volsungs

from Old English:
selected poems such as “The Wanderer,” “Deor,” “Widsith,” “The Battle of Maldon”

from Finnish:
selections from The Kalevala

Tolkien:
The Lord of the Rings
“Leaf by Niggle”
“Beowulf: The Monsters and the Critics”
The Fall of Arthur

from Middle English:
Sir Gawain and the Green Knight

While you will be expected to read secondary sources relevant to your research projects, the entire class will be reading in common excerpts from the following theorists and critics throughout the year:

Student project (below): Doors of Durin by day and by moonlight. Copyright Jenny Davison 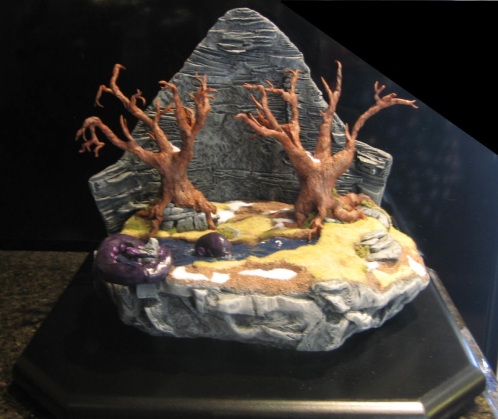 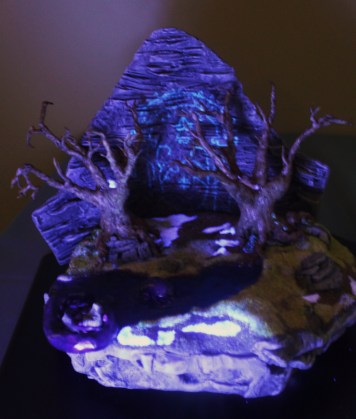 As a 4000-level seminar course, this is a small class in which you will be expected to participate fully  — by asking questions, being willing to discuss the texts, and thinking hard about theoretical and literary concepts. Over the course of a year, we’ll get to know each other quite well. Of course, you’ll be asked to do research and to write essays (the exact assignments will be announced closer to September).

One feature of this course is that you will have the option to do creative work — writing, performing, singing, painting, filming, photographing — there are all kinds of options for those who want to try something new or to bring into play talents they already know they have. To give you an idea of the range of possible topics, here are a few past students’ projects:

All of the creative arts projects require a research-informed written analysis of the work; all of the standard research papers require the same level of creativity and attention to craft and execution as the other projects.

I always try to break up major assignments into workable units with manageable deadlines and to give ample guidance in producing these works.  More details about the evaluation scheme and assignments will be given in class.

Below:  student project by Shelby MacGregor– scenes from an imagined dystopian LotR film.  1.  The Black Gate is Closed;  2. Eowyn 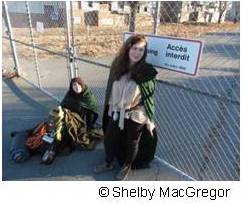 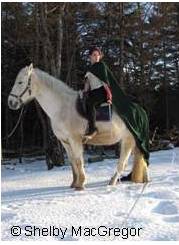 A detailed syllabus will be handed out in class and posted on the Moodle site. Updated weekly assignments and readings will always be listed in the weekly outline on Moodle. 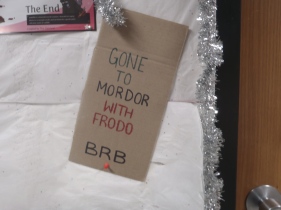 Image:  The image at the top of this page is a detail from Tolkien’s painting, “Glaurung sets forth to seek Turin” which was first published in the Silmarillion Calendar 1978. See Tolkien Gateway for information.

6 thoughts on “ENGL 4475 Studies in Medievalism: Tolkien and Myth-making”