The course at a glance

From writers of romance to religious rebels, misogynist preachers to feminist advocates, our focus will be on texts written by and about women between 1100 and 1500. ENGL 4476 aims to challenge clichés about the European Middle Ages and help you gain a greater understanding of the ideas that sustain our contemporary culture. 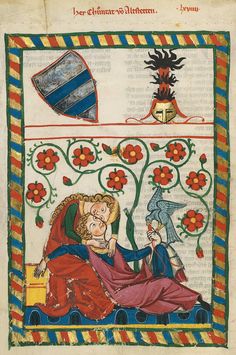 This course explores the literature of the European Middle Ages between approximately 1100 and 1500. Using gender as a category of analysis, we will examine constructions of sexual difference, class, and cultural alterity in texts written by women and about women. Beginning with troubadour lyrics written by women and some of the short romances and fables of Marie de France in the twelfth century, we will examine the social and political conditions that gave rise to what modern critics have sometimes called “courtly love.”

We will then move on to the influential thirteenth-century text, The Romance of the Rose, whose idealized and misogynistic representations sparked an intense debate about women in the fourteenth and fifteenth centuries in which the writer Christine de Pisan was a leading figure. We will look at her fiction, mainly The Book of the City of Ladies, which serves as an extended commentary on the debate from a woman’s point of view. Geoffrey Chaucer’s responses to The Romance of the Rose in his shorter texts, such as “The Wife of Bath’s Prologue and Tale” and The Parliament of Fowls, will lead into our study of the sexual politics of romance in his major work, Troilus and Criseyde.

We will also examine women’s roles in Christian mysticism through the writings of Margery Kempe and Julian of Norwich as well as the representation of women and racialized others in encounters between Christians and Jews or Saracens in Chaucer’s “Man of Law’s Tale,” “Prioress’s Tale,” and in the anonymous work, The Sultan of Babylon.

Throughout the term, our study of these texts will be supported with excerpts from biblical commentaries, legal codes, penitential handbooks, clerical satires, natural philosophy, and with visual and musical arts. All of the readings will be in modern English translations except for Chaucer’s works and The Sultan of Babylon, which we will read in Middle English (with the help of some glossaries and translations – no previous knowledge of Middle English is expected).

In general, this course should develop your knowledge of the complexity of late medieval European culture that goes far beyond current clichés about the medieval. In recognizing what is both different and familiar in this period in western history, you will attain a greater understanding of our contemporary culture and the ideologies that sustain it.

You will also have an opportunity to engage in the discipline of medieval studies at a time of great turmoil and transformation in the field. The increased visibility of ultra-right movements, often misusing or appropriating medieval images for their ideas and sometimes harassing scholars who present a nuanced view of race, gender, and class in the Middle Ages that disproves simplistic beliefs about the past, have led to an urgent need among medievalists to take a stand. This course rejects any white supremacist misuse of the medieval and aims to foster an appreciation of the complexity of late medieval culture.

As you make your way through the course requirements, you will also gain an ability to read Middle English in Chaucer’s dialect and become familiar with some of the major writers of the later medieval period. As in all of our English courses, you will have opportunities to hone your research, writing, and presentation skills.

A course outline with a syllabus, the evaluation scheme, and the course policies will be handed out in class and posted on the course Moodle site.