I’m finding Tolkien’s Notion Club Papers* a fascinating and deep well of ideas. Last summer at the New York Tolkien Conference, I commented on the sub-creators who appear in the story; this year, for my conference presentation at the International Congress on Medieval Studies, I talked about another part of Notion Club, the embedded legend of King Sheave (which was also part of the Tolkien’s plan for the earlier and unfinished The Lost Road).

According to Christopher, his father called the King Sheave legends “an astonishing tangle.” My presentation was an attempt to untangle at least one or two threads, but I had to ignore how tightly woven into the picture are texts such as  “The Seafarer” and “The Death of St. Brendan.” There’s only so much you can do in a 15-minute presentation.

I started with what is likely to be the most recognizable appearance of Sheave in English literature: the Scyld Scefing story that opens the Old English poem Beowulf. The Beowulf-poet merges two mythical or legendary figures. The first is the warlike Scyld, the eponymous founder of the Scyldings, another name for the Danes in the poem; (“sc” is pronounced like “sh” in Old English). The other figure is Scef (or Scéaf / Scéafa): Sheaf, who is an ancient culture-hero or corn-god. In numerous sources, this Sheaf is said to arrive from an unknown land as a child sleeping on a boat with a sheaf of grain by his head. In his Beowulf commentary, Tolkien finds this Sheaf figure “the more mysterious, far older and more poetical myth” of the two.

Other medieval sources also mention one or both of these figures. Alexander Bruce, in his book Scyld and Scef, publishes and discusses 43 references from English, Danish, and Icelandic sources, in chronicles, poems, and genealogies, covering several centuries — in other words, the legends must have been well known in early Germanic cultures. In my talk, I enumerated a few sources that Tolkien used and reshaped in his own version of Sheaf / Sheave (Tolkien spells it differently in different places), including the one unique version of the legend, the Beowulf story in which Scyld Scefing is given a ship burial at the end of his life, sent back out to an unknown destination with treasures piled around his body.

But what is even more interesting to me are the ways in which Tolkien’s version is different from his medieval sources.  For one thing, Tolkien’s story is remarkable for its vivid visualization of details added to the legend. Here you can see Tolkien’s characteristic descriptive style, with an attention to the visual qualities of light: “a ship came sailing, shining-timbered, without oar or mast, eastward floating. The sun behind it sinking westward with flame kindled the fallow water.” (NCP 273-74).

Tolkien adds other elements to the story, such as the harp that comes with the child, and how Sceaf reveals his extraordinary powers through song. In most legends, Sheaf is meant to bring agricultural fertility; in Tolkien’s version, he also brings linguistic and artistic ripeness to the people. Tolkien’s version brings us right into the events of the story imaginatively and vividly, as if we too are there witnessing the scene along with the other marvelling people who rush out of their houses to gaze on and listen to Sheaf. 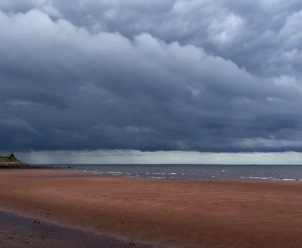 Finally, Tolkien adds hints or glimpses of how his King Sheave is tied to his own mythology of Númenor and the Blessed Lands to the West. For example, Sheaf’s ship sails in from the West to a dark, shadowed, deprived Middle-earth. There are also premonitions of the Eagles of the Lords of the West, a repeated refrain in NCP deriving from the story of Númenor as several characters experience or see it.

As interesting as I find Tolkien’s version of King Sheave, the full meaning of the story has to take into account not only what Tolkien makes of the legend but where he puts it. For Tolkien’s story of Sheaf is only one layer, deeply embedded, in a narrative about envisioning the past and about sea-longing. The Sheaf story is told in an Anglo-Saxon hall in King Éadweard’s reign, recited by Tréowine and concluded by his friend Ælfwine. This layer comprising of Ælfwine and Tréowine is in turn framed by the 20th-century story of Lowdham and Jeremy, two members of the Notion Club who are experimenting with time travel and are telling the story of Ælfwine and Tréowine to their friends.

Layer upon layer upon layer, with connections in word and image between layers “coming through” or “glimpsed” as the characters frequently say — the layers create a palimpsest or a pattern of recurring elements, made up of history and myth, including Tolkien’s own mythology. Verlyn Flieger has pointed out that framing has thematic significance in NCP, and the framing of the King Sheave story in several layers of time creates a tightly woven pattern that is impossible to unravel completely in this short summary.  Obviously, I have more untangling work to do this summer.

* NCP is an unfinished text published by Christopher Tolkien in Sauron Defeated, volume 9 of The History of Middle-earth.